For several years we’ve been performing at the Arisia science-fiction convention in Boston in January. Our performances have varied from Red Shift, which spoofs and pays homage to classic space-adventure serials like Buck Rogers and Flash Gordon through a radio-drama adaptation of The Day the Earth Stood Still to the gender-swapped Star Trek episodes we’ve performed lately, featuring the adventures of the intrepid Captain Jane Kirk and her half-Vulcan first officer, Ms. Spock.

The Post-Meridian Radio Players will have two performances at the 2019 Arisia science-fiction convention. We will continue our tradition of presenting gender-swapped Star Trek episodes, this time performing “The Enterprise Incident”. In addition we will perform a reprise of our original adaptation of Sherlock Holmes and Doctor Watson in “The Final Problem”.

More details will be provided shortly.

The performances will be at time slots to be determined during Arisia, which is the weekend of January 18-21, 2019. (A convention membership or day pass is required. If you can’t attend at the con, watch for our reprise of “The Enterprise Incident” in the spring!) 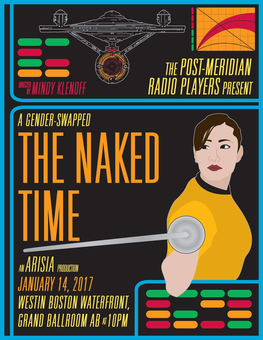 At the 2017 Arisia science-fiction convention, the Post-Meridian Radio Players will present Gender-Swapped Star Trek: “The Naked Time”! While investigating a lost research team on a dying planet, Ms. Spock’s landing party discover that the crew of the previous expedition froze to death under bizarre, irrational circumstances. When they return to the Enterprise, they start to behave erratically, and even stoic Ms. Spock has trouble controlling her emotions. Has whatever madness befell the research expedition spread to the crew of the Enterprise?

PMRP’s gender-swapped take on this classic episode will be on Saturday, January 14th at 10pm in Grand Ballroom AB. (A convention membership or day pass is required. If you can’t attend at the con, watch for our reprise in the spring!)

“Why did you marry him?” “At the time, it seemed the logical thing to do.” At the 2016 Arisia science-fiction convention, the Post-Meridian Radio Players presented Gender-Swapped Star Trek: “Journey to Babel”! The Enterprise finds itself host to a number of bickering diplomats - including Spock's parents. When an alien dignitary is murdered, the prime suspect is Spock's mother! The crew must unravel the mystery as an unidentified vessel attacks.

Suffering Shuggoths! The Roaring Twenties have just begun! Flappers! Gin joints! Deep Ones? A newly-regenerated Doctor joins forces with a struggling, nightmare-plagued writer by the name of Lovecraft to investigate attacks in Boston by monstrous creatures. Who is this eccentric Professor Whiteman who appears to be behind it all? What is the secret of the Professor's amazing chair that can seemingly cure the insane? What truly goes on inside the Miskatonic Gentlemen's Club? What will happen to the world, and every living being on it, when C'thulhu rises? Our performance at the 2011 Arisia science-fiction convention, which we then reprised in March 2011, was a mashup of Doctor Who and H. P. Lovecraft.

Our performance at Arisia in January 2006 was a recreation of the classic Lights Out! episode “Chicken Heart”. You can buy a CD at our CD Baby store.

It’s go time! Our performance at Arisia in January 2007 was an episode of our original series Red Shift: Interplanetary Do-Gooder, titled “The Terror of Terra-Khan”. We joined the stalwart Red Shift, his mechanic Lumpy and their Earthling companions in an homage to the pulp radio and film serials of the 1930’s and 40’s.

It’s go time! Our performance at Arisia in January 2008 was an episode of our original series Red Shift: Interplanetary Do-Gooder, titled “Havoc over Holowood”. Join Red, Lumpy, Doc Alberts and Penny Parker, Girl Reporter as they try to save a beloved space celebrity from his worst nightmare: angry fans with atomic weaponry!

It’s go time! Our performance at Arisia in January 2009 was an episode of our original series Red Shift: Interplanetary Do-Gooder, titled “Dance of the Duplicates”, in which our heroes—Red, Lumpy, Doc Alberts and Penny Parker, Girl Reporter—found double the trouble while in pursuit of a team of would-be Do-Gooders, only to encounter Red's arch-nemesis, Violet Spektra! We were accompanied by the cast of Second Shift performing “Dreams”, and participated in a panel on radio drama in New England.

No tribble at all! Actress-turned-Director Mindy Klenoff (“The Do-Nothing Detective”) presented a gender-swapped interpretation of the classic Star Trek episode, David Gerrold's “The Trouble with Tribbles” at the 2014 Arisia science-fiction convention. This was the first in a series of performances featuring the adventures of Capt. Jane Kirk, her half-Vulcan science officer Ms. Spock, and the crew of the Enterprise, in which devious saleswoman Cordelia Jones trades in small furry animals and inadvertently throws a cute purring monkey-wrench into a secret plot.