The Big Broadcast of 1962: A Byfar Christmas Carol 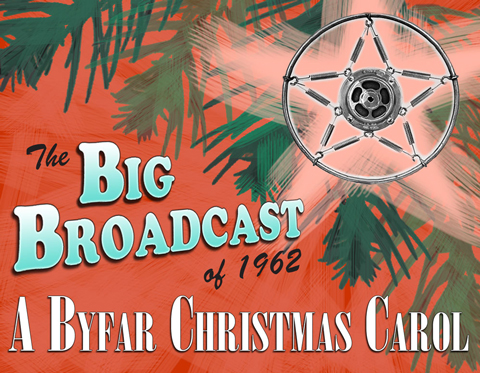 An evening of holiday entertainment even Scrooge couldn't say “Bah, humbug” to!
Join us this December as The Post-Meridian Radio Players proudly present our grandest show of the year: The Big Broadcast of 1962: A Byfar Christmas Carol!

Yes folks, this time around Frank Cyrano and the gang are learning the true meaning of the holidays in their own unique way. We'll have all of the classic comedy from the Byfar crew and the Chowder House gang. Live music, retro candies and soda and everything you could want in one family-friendly show.

The Big Broadcast is written & directed by

You may buy tickets for The Big Broadcast of 1962 in advance on-line through The Regent Theatre:

Parking: There is a municipal parking lot (see map above) right across the street from the Regent Theatre, w/ FREE parking after 6pm, Monday through Friday, and after 3pm on Saturday, and all day Sunday!

MBTA: The following buses all stop in Arlington Center only a few feet from the theatre!