Ring In the New Year
with a Little Chaos!

THE POST-MERIDIAN RADIO PLAYERS have been invited to perform as part of Boston's expansive First Night festivities: a city-wide extravaganza celebrating the arts and featuring over 200 local groups performing in 40 venues. Come see radio drama performed the way it was back in the 1930's, 40's & 50's.  Actors at microphones, live sound effects artists, and recorded audio effects will transport the audience from the cockpit of a heroic Do-Gooder's futuristic spaceship to the panic-stricken streets of a city doomed by science gone wrong!

PRESHOW: Interactive Foley Demonstration — Starting at 6:45pm, members of PMRP's "Foley" (live sound effects) crew will lead a hands-ondemonstration in the Lobby, where you make the sounds for a comic retelling of The Three Little Pigs. For children ages 6 to 106.
ACT 1: Red Shift: Interplanetary Do-Gooder in “Countdown to Chaos!” — The PMRP bring to the stage their acclaimed original sci-fi comedy adventure program. This sendup of the pulp sci-fi serials of the 1930s and 40s features Red Shift, a licensed Do-Gooder for hire, and his faithful friend and mechanic Lumpy. In “Countdown to Chaos!”, the villainous Lord Draith forces the duo to crash-land on the forbidden planet of Earth. Their ship attracts the attention of the world-renowned scientist Dr. Alberts and snoopy Penny Parker, Girl Reporter, who find themselves trapped inside the rocket when calamity comes to call. Can Red and Lumpy escape from the primitive planet, or will human technology be their doom? Are Penny and Doc destined for a sudden trip into outer space, or will they get the chance to pack first? The amazing adventures begin here!
ACT 2: Arch Oboler's “Chicken Heart” — The infamous “lost” episode of the seminal horror series

"Countdown to Chaos!" is part of First Night 2009 and admission is open to anyone wearing a First Night 2009 button.
Buttons can be purchased through First Night's on-line store or at any of a number of retail outlets throughout Eastern Massachusetts.

Written by Arch Oboler
Originally aired on Lights Out! in March of 1937 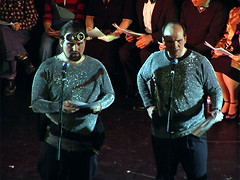 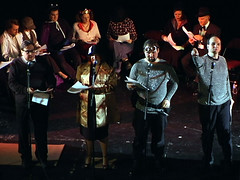 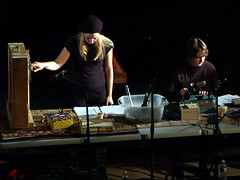 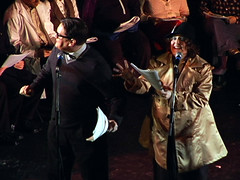 Click here or on the thumbnails above to browse our photos from the show.