You can buy tickets online, or make reservations to pay at the door on our Tickets page.
Performances: October 28, 29, and 30.
(8pm performances on all dates, plus a 2pm matinée on Saturday the 30th.)

The Post-Meridian Radio Players are proud to announce our Halloween show, “Plan 9 from Outer Space” with an original prequel fiasco, “Plan 8 from the Outer Ether”! 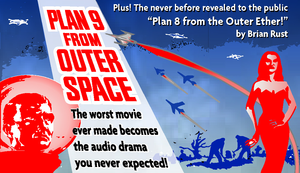 Plan 9 from Outer Space is an original adaptation by Michael McAfee of the classic “so bad it’s good” film by Ed Wood, in which extraterrestrials reanimate Eartlhings’ dead bodies.

Plan 8 From the Outer Ether: a Steampunk Fiasco, is a comedy about a dysfunctional theater troupe attempting to put on a live radio play. The play they’re performing, Plan 8, is a prequel to the events in “Plan 9 From Outer Space”, set roughly 50 years prior to the other show.

Plan 8 from the Outer Ether: A Steampunk Fiasco