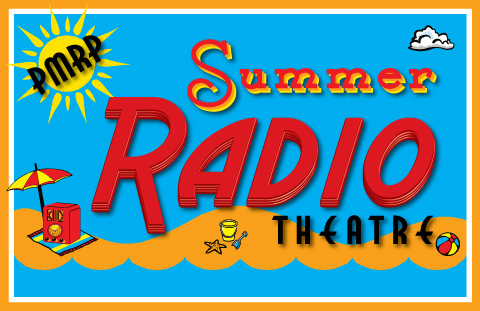 For the first time ever, The Post-Meridian Radio Players present a live summer show! In the tradition of our original Tomes of Terror Halloween thrillogies, we present three half-hour radio dramas of suspense, adventure and thrills to add excitement to your summer!

When a mystery man pays private detectives Jack Justice and Trixie Dixon a hefty retainer to drop a client they never had, it looks like they finally caught that nice soft case every detective dreams of. But it couldn't really be that simple...could it?

A product of the Toronto-based audio drama producer Decoder Ring Theatre, this series features tales from the casebook of that master of mystery, that sultan of sleuthing, Martin Bracknell's immortal detective Black Jack Justice. The Post-Meridian Radio Players are grateful to the folks at DCT, and to BJJ creator Gregg Taylor for permission to perform one of the episodes from this fantastic series.

An episode of the classic 1950's sci-fi series, based on a short story written by Clifford D. Simak, in which the crew of a rocketship land on an obscure planetoid whose salient features are a junkyard of scrap parts from another ship and a mysterious tower.

Based on the short story by Clifford D. Simak
Adapted for radio by George Lefferts
Directed by Michael McAfee

X Minus One and its predecessor, Dimension X, are fine examples of why radio could be considered the perfect medium for science fiction. From 1955 to 1958, this NBC series featured dramatizatons of stories from authors we consider today to be the Masters of SF: Asimov, Bradbury, Dick, Heinlein, Pohl and Sturgeon, among many others.

One of the all-time classic stories of old-time radio, originally featuring Vincent Price. After a derelict ship runs aground on their reef, three lighthouse keepers must fight for their lives against thousands of starving rats!

From 1947 to 1954, Escape was the leading high-adventure anthology series on radio and featured the popular voice actor William Conrad (later to play Marshal Matt Dillon on the radio version of Gunsmoke and Frank Cannon in the 1970s TV detective series Cannon). After Orson Welles' War of the Worlds broadcast, "Three Skeleton Key" is, perhaps, the most famous radio drama story of all time. Between Escape and its sister show, Suspense (1942–1962), audience demand compelled producers to air the story no less than five times!

You may buy tickets for Summer Radio Theatre in advance
on-line through Brown Paper Tickets:

You may reserve seats using the form below and pay for them at the door.