(Except When It’s a Matinée) 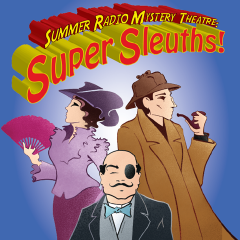 Performances: July 17, 18, 23, 24, and 25, 2015
(8pm performances on all dates, plus a 2pm matinée on Saturday the 18th). The Post-Meridian Radio Players are proud to present their fifth annual Summer Radio program with Night of the Super Sleuths (Except When It’s a Matinée): a trilogy of spine-tingling murder mysteries!

When a celebrated actor turns up dead, it looks like the overprotective father of his young bride to be is to blame, but as Hercule Poirot knows, not everything is as it appears.

Lady Molly of Scotland Yard
in
The Frewin Miniatures

When a set of priceless miniature figures are stolen from the art collection of the Frewin family, and with the men of Scotland Yard baffled by the crime, Lady Molly and Mary are called in by the Chief to investigate the case.

Sherlock Holmes
in
The Adventure of Charles Augustus Milverton

Sherlock Holmes and Doctor Watson must defeat the man they call the King of all Blackmailers, Charles Augustus Milverton. With a woman's life and reputation on the line, Sherlock Holmes plays a desperate game and must look for methods outside the law to best this most clever of criminals.