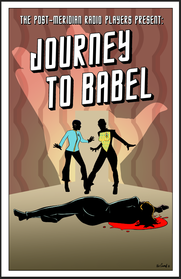 At the 2016 Arisia science-fiction convention, the Post-Meridian Radio Players presented Gender-Swapped Star Trek: “Journey to Babel”! The Enterprise finds itself host to a number of bickering diplomats - including Spock's parents. When an alien dignitary is murdered, the prime suspect is Spock's mother! The crew must unravel the mystery as an unidentified vessel attacks.

Our performance was on Saturday, January 16, at 10pm at the Arisia science-fiction convention. (You must have an Arisia membership to attend — unless you’re part of the performance!) Day memberships are usually available (although they sometimes sell out).

(We will also be reprising the show in Davis Square, Somerville, on June 3 at 8pm and June 4 at 2pm and 8pm.)